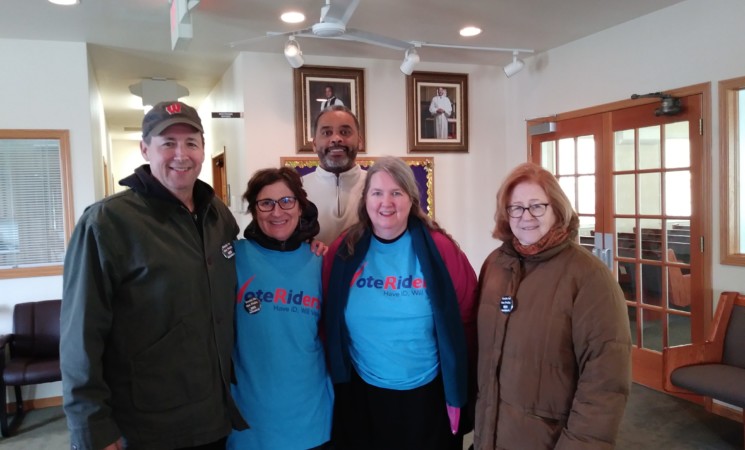 Oprah Winfrey recently described the form of government which some Americans now feel they must fight to preserve:

The foundation of democracy is to think about other people, to live a life in service to others… recognizing that what is good for everybody is what’s good for us.”

Americans living that definition can be found among VoteRiders’ volunteers, providing service to others and to our democracy itself as they help Americans to vote and to make sure their votes count. Some even travel a distance to volunteer where their assistance is needed most.

Volunteer Ed Shapiro recently funded his own 2,000–mile trip from his home in Port Townsend, Washington, to Milwaukee. Given the several highly competitive races there, Ed decided to help Wisconsin voters learn about their state’s strict voter ID law. His message to voters is a key VoteRiders mantra: Without the proper ID, even a registered voter can be denied the right to vote. Voting is a right and a privilege and one of the pillars of our democracy. Voter suppression is a travesty. I didn’t consider myself an activist, but I felt I had to do something more than sit in front of my computer and complain.”

Ed describes himself as a newcomer to canvassing, which was the task at hand, and as an introvert who cringed at the idea of knocking on strangers’ doors. “A 74-year-old white guy, canvassing in the African-American community?… How would people react?”

Anita Johnson, VoteRiders’ Wisconsin Voter ID Coalition Coordinator, had different misgivings about Ed’s trip, which she expresses with a kind of wonder in her voice. “To come from out of state… Why would you leave your state to come work in Milwaukee?” She wanted Ed’s trip to be a meaningful experience for him and vowed to keep him busy, starting with the 500 VoteRiders information packets they assembled together at a local library. Incidentally, the answer to Anita’s question was that Ed’s home state of Washington has a non-strict voter ID law that applies to the relatively few voters who vote at a voting center vs. by mail.

Volunteers like to tell you what they can do instead of listening to what you want them to do. I need canvassers. If not, thank you anyway. I don’t ask volunteers to do anything I don’t do. I canvass, as well. I want to know what’s going on out there so I can advise the volunteers. But whatever I asked Ed Shapiro to do, he did without any grumble or gripe.”

Ed’s concerns about voting restrictions in the African-American community, where he feels strict ID laws are inflicting the worst suffering, overrode his initial trepidation. For Ed, the most memorable part of his experience was simply that every single resident he visited thanked him. Even those who already had ID and didn’t need his information made Ed feel hopeful that people are preparing to vote. For Anita, that day had a different takeaway: “Because of the literature we left on one doorstep, a woman called me to find out more. Every single voter makes a difference.”

Spearheading Milwaukee’s Souls To The Polls canvassing, Anita speaks with excitement about the effectiveness of combining that group’s information and VoteRiders’ information. She is alarmed that in 2016, 9,000 voters in Milwaukee and Dane Counties alone were barred from voting because they lacked an acceptable photo ID. (In addition, confusion generated by the state’s photo ID law may have deterred more than 16,000 who actually had a valid ID in those two counties.) Anita visits multiple churches each Sunday, making sure parishioners have the required ID and organizing them to join her in canvassing homes surrounding their church.

Anita says, “That’s where Barbara and Tom came in.” VoteRiders volunteers Barbara and Tom Wallace traveled to Milwaukee from Chicago to join parishioners’ Souls To The Polls canvassing efforts - in a snowstorm! They distributed materials, confirmed early voting locations, and reminded voters that they can register to vote at the polls but will also need a valid photo ID.

Unlike Ed Shapiro, Barbara Wallace is an experienced canvasser, with no reservations whatsoever about knocking on strangers’ doors. “Democracy is fun. Canvassing is fun. It’s not scary to talk to people. It’s fun to talk to people.“ Tom Wallace agrees: “It’s incredibly satisfying. Everyone should get outside their comfort zones. You feel good about yourself.”

Barbara recalls registering voters outside citizenship ceremonies in Los Angeles, a profoundly moving experience for her. She was taken aback, however, to find some organizers advising not to register people with opposing political beliefs. That was a formative time for Barbara, helping her internalize the precept which has since defined her political philosophy: “The number one thing is to never discourage anyone from voting, even when voting against my politics.” She goes further: “Actually, that’s a good thing. Even if you lose, when everyone votes, you know where you stand.” This volunteer’s words bring to life Oprah’s vision of democracy.

Another lesson shared by Barbara and Tom is not to be discouraged by small numbers accomplished on canvassing expeditions. Tom stresses, “We tell our friends not to complain about finding only three people at home. That can be tedious, but do the math. If ten volunteers are canvassing, and each volunteer talks to three… Elections can turn on thirty votes.’” Barbara adds, “Michigan turned on two votes per precinct.”

Anita’s outreach includes virtually every demographic, such as the Jewish and Muslim communities.

In a discussion with a Milwaukee rabbi about her work with volunteers from the Jewish community, the rabbi asked, “All this reaching out… How do you know it works?” Before she could answer, and as if on cue, a passerby approached with pertinent photo ID questions. Anita turned back to the rabbi with a brief reply. “See?”

Just recently and for the first time in her career, a mosque invited Anita to discuss voter ID. The head of their voting program thanked her for describing the changes to voting rules and methods for obtaining voter ID, both of which had come as news to him. For Anita, the icing on the cake was the permission she received to display VoteRiders’ posters at the mosque.

For Anita, it all boils down to her straightforward measure of the effectiveness of her endeavors: “Success means educating about ID and about what voters need to do.”

Barbara and Tom Wallace concluded with the advice, “If you don’t want to canvass with strangers, canvass with your friends, and get them to vote.”

And Ed Shapiro has a fantasy about manufacturing hats with a logo that Oprah would approve: