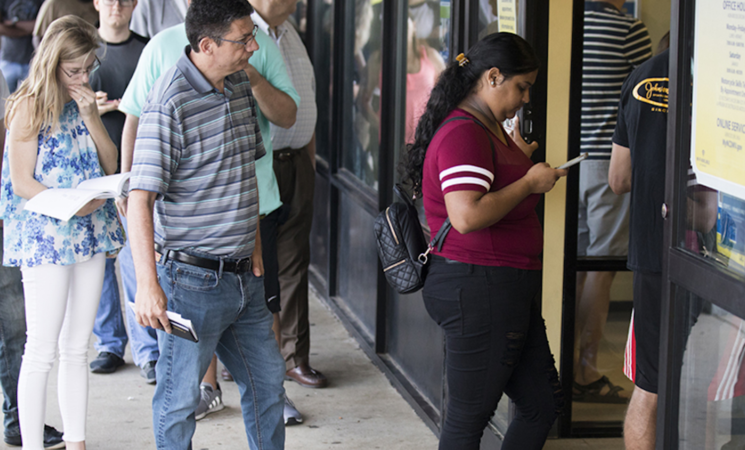 Lately, you may have noticed more people trying to get into the DMV than the hottest clubs in town. That’s not because driving is suddenly cooler than dancing. The spike in DMV traffic is driven by people applying for REAL ID, a new form of identification that will be required of all air travelers by 2020, unless they have another federally sanctioned ID.

In states like California, Texas and North Carolina, REAL ID applications have soared, severely straining an already over-taxed system. Lines snake out the doors and around the corners of most DMV offices. According to news reports, people are waiting hours just to file their applications. The departments have been caught flat-footed and lawmakers are scrambling for solutions.

All of which makes REAL ID a real pain for anyone who actually wants to get one.

A friend first alerted me to the issue over dinner recently, when she posed the following question: With ID shenanigans already prevalent in states trying to restrict voter turnout, what happens when you add yet another layer of complexity to the ID process?

That’s an important question, because many states require voters to get authorized voter IDs from the same places they get driver’s licenses. Just months out from the critical mid-term elections, the REAL ID has added yet another layer of difficulty and confusion to an ID process that was already disenfranchising for millions of eligible citizens.

A North Carolina newspaper reported that the DMV experience had become even more hellish than it was before. “Chapel Hill resident Mary Parry experienced extended wait times at the Hillsborough DMV location when taking her daughter to perform her driver's license test on Aug. 15,” the paper reported. “’We arrived around 7 knowing they didn’t open until 8,’" Parry said. "’We were in a line of 40 people or more.’”

DMV employees informed Parry there would be a long wait. Hers was eight hours.

In Texas, which built Department of Public Safety mega centers six years ago to alleviate conventional over-crowding, similar eight-hour waits have been reported, with many people spending hours in 100-degree heat just to get in.

The wait times in California can be equally epic, and frustration over DMV lines has even become an issue in the state's gubernatorial contest.

Like a lot of flawed ideas, the REAL ID law started with good intentions.

In the wake of 9/11, Congress thought that stronger ID laws were required to enhance security. REAL ID was seen as a better way to ensure that people were who they said they were. Put another way, making it harder to get an ID was supposed to make it safer. But God is always in the details.

Only 27 states, plus the District of Columbia, have managed to have their REAL ID programs sanctioned so far. Another 20 are working to get there and have been granted extensions. Three are under consideration by the Department of Homeland Security, which reviews applications to ensure that states are following the rigid new ID procedures.

After I learned about REAL ID, I assumed that I was in the clear. I had just been issued a new California driver’s license and since I’m not a criminal, it seemed only logical that the new license would be REAL ID compliant. Wrong. You don’t just get a REAL ID in the mail. That would be too easy. You have to apply for it in person. As the California DMV website illustrates, the REAL ID has a graphic of a California grizzly bear with a star in the upper right hand corner. No star, no REAL ID. I would have to visit a DMV office to fix that.

So, how does REAL ID work in practice?

If your state isn’t REAL ID compliant, you automatically need alternative acceptable identification to enter military bases and nuclear power plants as well as most federal buildings - and by October 1, 2020, to board a domestic commercial flight.

Others forms of acceptable ID include passports, border ID cards and Global Entry cards. According to the U.S. State Department, 36% of Americans have passports. By comparison, nearly every American adult (up to 90%) is reported to have a driver’s license.

That’s why so much of the burden is now on the DMV to handle the transition.

In California, the pain has been widespread.

I took a deep breath and punched in the California DMV’s URL. A message popped up, instructing me to try again later because the online booking tool was broken. When I tried again the next day, it was working. I was able to book an appointment just two weeks out.

I convinced myself that I would be different, because I had an appointment.

When the big day came I gathered up my passport, proof of both my social security number and address, because additional forms of identification are required, and headed over early. As soon as I turned into the DMV parking lot, I realized I was in for more than I had bargained for.

The line of people waiting to get in was visible from a block away. Drivers like me circled the lot, searching in vain for empty parking spaces. Since there weren’t any empty spaces, a growing, funeral-like procession of cars formed, crawling through the lot in vain. Eventually, some of us moved to distant side streets, where we were able to find parking.

Lesson #1: Unless you take alternate transportation or arrive super-early, you have to park somewhere that’s not the parking lot.

By the time I made my way to the DMV office, the line of people waiting to get in was, of course, longer. It ran out of the front door and down the block. The entrance itself was clogged with people trying to determine if those with appointments had to wait in line with the rest of the sorry-looking crew. Each time someone circumvented the line and approached the door, it looked like someone in the line was going to attack them. It was anarchy.

Lesson #2: There is no distinction between people with appointments and everyone else.

I gave up and went back to work.

“Maybe it will get better if we give it time,” I replied.

Lesson #3: Maybe things were fine just the way they were.

VoteRiders’ Addendum: How does Real ID relate to Voter ID?

You do not need a REAL ID to vote.

11% of voting-age U.S. citizens lack a current government-issued photo ID…which means that roughly 25 million voters nationally do not have the only types of ID that are common to all state voter ID laws: the voter’s state driver’s license or state ID.

In addition to those 25M without a likely voter ID, VoteRiders’ on-the-ground experience, which has been corroborated by reputable university studies in Texas and Wisconsin, shows that many, many millions more citizens are so confused and intimidated by complicated and stringent voter ID laws that they won’t vote, even though they have the requisite ID.

To obtain a driver’s license or state ID in any state, you need the same kinds of documents that are required for a REAL ID (such as this example listing the three categories of documents required to apply for REAL ID in California).

Having worked with voters since April of 2012 to secure these types of records in order to obtain their “free” voter ID, we know that many millions of Americans do not have them readily available; nor do many of these citizens know how to procure these documents. Of course, many of them cannot afford the time and money involved. Among the “catch-22” paradoxes you might encounter are the need to submit a copy of your photo ID to acquire a certified copy of your vital papers like a birth certificate or a replacement social security card.

If you require any information or assistance securing your ID to vote, including the underlying documents needed to apply for ID to vote, please contact VoteRiders via this website, or call/text our Voter ID Helpline: 844-338-8743