The REAL Myths about voter ID: VoteRiders’ view from the trenches 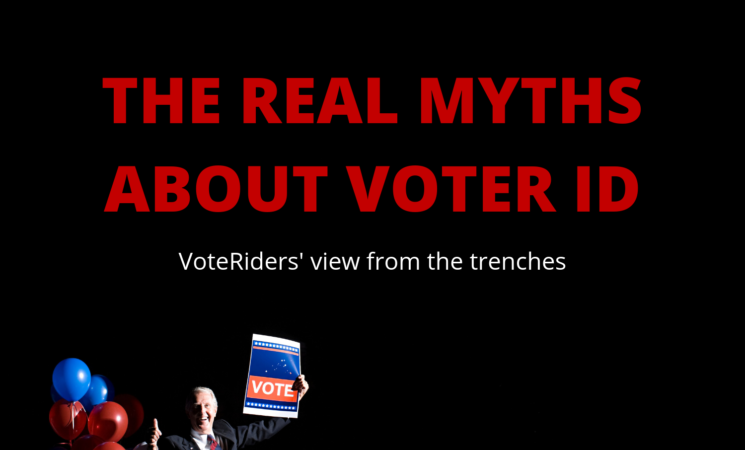 In February a working paper concluding that voter ID laws had almost no effect on voter turnout (or voter fraud) gained national attention. VoteRiders has a very different view based on seven years of working directly with voters on a nonpartisan basis, helping them to understand voter ID requirements and obtain the ID and documentation necessary to secure their right to vote.

Trust VoteRiders’ experience, corroborated by reputable studies: the real myth of voter ID is the widespread failure to recognize the impact of CONFUSION on the confidence of voters. And for citizens who don’t have a current driver’s or non-driver's license in their state, it is a BIG DEAL to obtain a voter ID."

The eligible voters we interact with daily are often confused by the difference between voter registration and voter ID, along with the arcane lists of what type of IDs are valid for voting. We help them overcome the multiple barriers to acquiring an ID if they do not currently have one, including the cost of traveling to an ID-issuing government office and the cost and bureaucratic nightmare of securing documentation like a birth certificate.

Nor are we alone in our conclusion that the effects of voter ID are large enough to make a measurable difference. Another current study in the same outlet, "Effects of Photo ID Laws on Registration and Turnout: Evidence from Rhode Island,” found that,

"Turnout, registration, and voting conditional on registration fell for those without licenses after the law passed. We do not find evidence that people proactively obtained licenses in anticipation of the law, nor do we find that they substituted towards mail ballots which do not require a photo ID.” (emphasis added)

Roughly 11% (25 million!) of voting-age Americans do not have a current government-issued photo ID, according to the Brennan Center for Justice. These potential voters are mostly citizens without a current driver’s license: older adults, students and young voters, people with disabilities, voters of color and those with low income.

An equal if not greater number of citizens nationwide are so confused and intimidated that they will not vote even though they have an acceptable ID (or do not know that none is needed in their state). Academic studies showing the effect of confusion about voter ID on voter turnout include:

So while voter ID can do little to reduce the (already virtually nonexistent) incidence of in-person voter fraud, these laws directly affect the ability of millions of eligible Americans to exercise their right to vote through confusion and disenfranchisement.

VoteRiders helps citizens to understand what is or is not required to vote in their state through free resources including:

VoteRiders is a 501(c)(3) nonpartisan nonprofit organization with a mission to ensure that every eligible voter has the information, ID and confidence needed to cast a vote that counts.