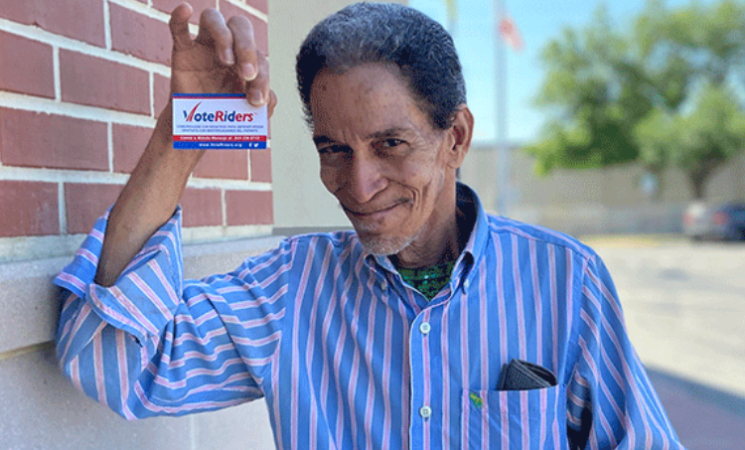 Carlos reached out to VoteRiders when he relocated to Florida after earthquakes destroyed his home in Puerto Rico. He currently lives with his sister in Poincianna.

Carlos visited the office of Puerto Rican Federal Affairs Administration a total of four times and visited three separate Department of Motor Vehicles offices before he was able to obtain a Florida State driver's license.

The necessary supporting documents to obtain a Florida driver license or state ID are an acceptable proof of identity, proof of Social Security number, and two proofs of residential address. I knew that Carlos needed an up-to-date version of his birth certificate because Puerto Rican birth certificates are valid only if they were issued after July 2010. We set out to visit the office of Puerto Rican Federal Affairs Administration (PRFAA) in Orlando. However, when he arrived, Carlos was told that they were unable to assist him because his Puerto Rican ID was expired.

They advised Carlos to come back when Florida Licensing on Wheels was there. During his second visit, they were unable to assist him due to the large demand for assistance. The office shut down before Carlos was even seen.

During his third visit, Florida Licensing on Wheels canceled and was not present. The Executive Assistant of the office recommended that we go to the DMV and request a temporary ID for Carlos in order to obtain a birth certificate. The birth certificate could be obtained that same day at PRFAA with the condition that Carlos must return to the DMV within 48 hours in order to ensure the DMV-issued ID would remain valid.

When we arrived at the DMV, Carlos was unable to stay for the two-and-a-half-hour wait. So we made an appointment at the Osceola County DMV.

A week and a half later, Carlos arrived at Osceola County’s Pleasant Hill Office for his appointment only to be told they do not provide the service of temporary IDs. We were advised to visit the county's main branch on E Irlo Bronson Memorial Highway. At this branch, Carlos was issued a 60-day ID that he could use to obtain a birth certificate.

Carlos took this ID to the PRFAA office to obtain a birth certificate. After his birth certificate was printed, he took it back to the DMV to ensure that his temporary ID would be valid for the full eight years.