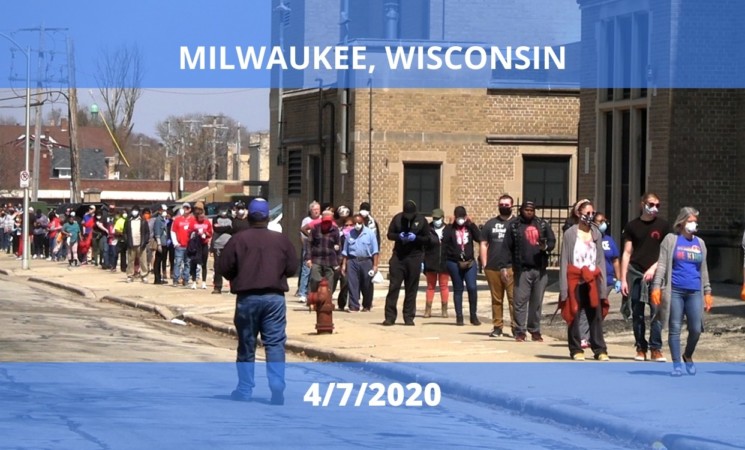 Election Day in Milwaukee was unusually warm. Anita Johnson, VoteRiders’ Wisconsin Coordinator, says that the nice weather was the “only thing on our side.”

For weeks leading up to the primary election on April 7, the COVID-19 crisis had been causing complete chaos in Wisconsin’s voting process. Changes in procedures, last-minute court rulings, and dire warnings about the dangers of voting in person were increasing by the day, and people were scared, upset, and confused.

For at least a month before Election Day, Anita was continuously inundated with emails and phone calls from voters wondering how they were going to vote. She realized that the most important impact she could have in this election was reaching out to as many voters as possible, “to help them feel less confused.”

As one of the founders of Milwaukee’s Souls To The Polls coalition, Anita knew that she could connect with a lot of voters quickly by mobilizing church communities. She sent a postcard with detailed information about absentee voting and drive-through voting locations to 25 Milwaukee area churches to include in their church newsletters and bulletins. This effort helped reach tens of thousands of voters.

Then Anita and her community canvassers and volunteers started calling church members to see what questions they had about how to vote safely. The list of questions was long and discouraging:

VoteRiders’ indomitable volunteers, Shirleen Givens and Joyce Huntley, spoke to hundreds of voters and provided whatever information they needed. Many of these voters were discouraged and scared and had decided not to vote at all because of the confusion. Shirleen offered to pick them up and drive them to their voting location. She put on her own mask and gloves, packed extras for her passengers, and drove around Milwaukee all day. Joyce helped 40 voters with the procedures for filling in their absentee ballots and getting them witnessed.

The next election in Wisconsin will be in August, and then of course the General Election on November 3. Regardless of whether stay-at-home orders are still in effect, Anita believes that the hard work of educating voters about absentee ballots, voter ID (required both in person and by mail), and other ways of voting safely should begin NOW. She is training volunteers who had previously wanted to register voters in person as phone canvassers instead. The churches and community leaders involved in Souls To The Polls are committed to empowering every Milwaukee voter with the information they need to vote safely and confidently in 2020 - and beyond!

Previous article No Photo ID = No COVID-19 Test for Millions?