While voter ID laws silence millions of Americans, they hit some communities harder than others. Voters with disabilities are especially affected by voter ID laws because of the challenges they face in getting identification.  Many don’t drive so they don’t have driver’s licenses, and they also don’t have their own transportation, making it difficult to get to the DMV for a state ID card.  Traveling to the DMV and paying for an ID can also be costly, creating another barrier to access.

VoteRiders recognizes the unique and unjust ways in which the disability community is affected by voter ID laws. Through our robust voter ID education and one-on-one assistance, our dedicated team works tirelessly to ensure that voter ID laws are not preventing voters from casting their ballot and making their voices heard. 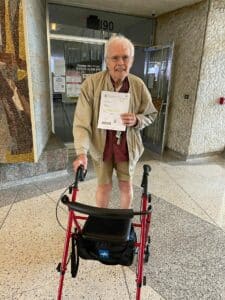 Ronald Wright, an elderly resident of Milwaukee, was convinced his effort to vote would be futile because he didn’t have an acceptable photo ID. Wisconsin requires one of eight forms of photo ID to receive a ballot, but he had lost his driver’s license years ago, and couldn’t find his old US Passport either.

Luckily, a poll worker  told Ron not to leave — they were going to call VoteRiders for help.

That’s when Nick Ramos — VoteRiders’ Wisconsin Voter ID Coalition Coordinator — sprang into action. Nick told the poll worker to have Ron return home, where Nick would be waiting for him to help him get an ID to vote.

Nick helped Ron search his apartment for documents with Ron’s name and address so he could get a Wisconsin state ID. Once these were gathered, they headed to the DMV. Ron uses an electric wheelchair and doesn’t have reliable transportation, so Nick called an Uber to take them there. Once they arrived, Nick helped Ron fill out an application for a state ID card. The next thing he knew, Ron was being handed a temporary photo ID document, free of charge, that he could use to vote before the DMV mailed his permanent state ID card. Nick called another Uber to take them back to Ron’s polling place, where he showed his new photo ID to the poll worker and received his ballot. “He was so thankful for my help and I told him that we are here for him whenever he needs assistance,” Nick said. 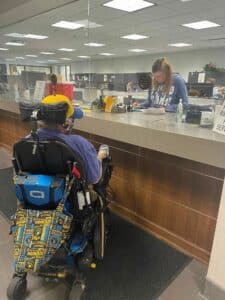 Luckily, this didn’t stop Dawn’s vote from being counted. Barbara Becker of Disability Rights Wisconsin, Anita Johnson of Souls to the Polls, and our very own Nick Ramos teamed up to ensure Dawn’s vote would be counted.

Dawn first contacted Barbara, who connected her to Anita, a member of the VoteRiders Board of Advisors and the former Wisconsin Voter ID Coalition Coordinator. Anita helped Dawn secure a temporary photo ID at the DMV. Once she picked the ID up, Nick swooped in to make sure her vote would be counted. Nick met Dawn at her home in South Milwaukee and accompanied her to the municipal clerk’s office where he helped her cure her ballot. One hour before the curing period was officially over, Dawn’s ballot was counted.

In addition to the direct one-on-one assistance that Nick provided for Dawn, dozens of VoteRiders volunteers also set out to reach as many of Wisconsin’s 49 provisional voters as possible after Election Day. Through actively calling and texting voters, Nick and other trained volunteers gave them the information they needed to cure their ballots and make sure their voices would be heard.