Our Motivote Origin Story: What & Why

On paper, I check all the boxes for “civically engaged Millennial” – I have degrees in Political Science and Public Administration. I participated in (and later, staffed) both Model UN and Youth & Government programs. I’ve asked bartenders to switch the TV to the Vice Presidential debate. I’ll talk incessantly about political opinions and care deeply about policy design.

And yet, until pretty recently, I had never voted in a non-presidential election.

It wasn’t that I didn’t think, in theory, it was important. But I never prioritized it.

I was living in New York but still registered in New Jersey. By the time I realized there was an election (usually on social media, the day of) it was too late to do anything.

Back in 2018, my grad school classmate and I started to explore the question of “why don’t people vote?” through a behavioral science lens.

She was a former student organizer, the person chasing you down with a clipboard on the quad. And she was frustrated by the volume of people who said they were planning to vote — and seemed to have every intention of doing so — but ultimately dropped off. When it came time to pick a research topic for our MPA Capstone Project, we wanted to focus on this disconnect between intending to vote and actually doing it. Ultimately we built a software solution, Motivote, to make it easy for organizations to bake strategies based on behavioral science into their programs and track progress at scale.

Our mission at Motivote is to help more people vote, more often. We do this with software and strategies informed by behavioral science. One of our key strategies is to reduce friction or anything that gets in the way of performing a behavior. For example, when paperwork has many steps, that’s friction.

How Voter ID Laws Cause Friction

When you list out everything someone needs to think about and do in order to cast their ballot, every item on that list represents friction — and an opportunity for drop-off.

Voter ID rules are a textbook example of friction.

First, voters must ask themselves, Do I need to show an ID to vote? Then, What kind of ID can I bring, or do I have to show proof of ID to vote by mail? And finally: Do I have that ID? Does it meet all the criteria? Where is it?

The first and second questions should be straightforward, but they’re often not.

Some people shut down at the beginning of that thought process. It’s confusing and overwhelming, another stressor to deal with.

In some states, requirements frequently change or move in and out of legal limbo — meaning voters can’t just go on auto-pilot with what they did last time. Some states have different ID requirements for voting in person at the polls or by mail.

For many voters, changes in their life cause complications.

For example, you moved to a new state a couple of months ago and haven’t gotten around to getting a new Driver’s License yet. Your new state requires an ID from your state.

We’ve even heard from voters who didn’t vote because they thought they needed an ID and didn’t have one — when their state actually didn’t require it.

After we’ve gotten past “if ID?” and “what ID?”, there’s another layer:

“Do I have an ID that meets these requirements? And if not, can I get one? And, how?”

And while there are great services (shoutout VoteRiders!) that help people get free IDs, that’s still another set of emails to send, calls to make, documents to dig up, appointments to get to, paperwork to complete….each additional step is another potential point of drop-off.

Not to mention: Needing ID when voting in person is only one way that ID laws cause friction.

A few states require you to include a photocopy of your Driver’s License (or other State ID) when requesting or returning an absentee ballot. It’s not hard to imagine: Start filling out the forms, get stuck figuring out how to make a photocopy, decide to come back to it…and never do. (That’s why we love spreading the word that VoteRiders provides a free photocopying service!)

Partnering with VoteRiders allows us to equip our users with the tools they need to follow through with voting intentions and build strong civic habits, and ensure that they have the ID information and free help they need to cast a ballot in every election.

We wish that everything related to voting was simple, straightforward, and hassle-free. As a software platform, we can’t change the laws or processes (sigh). We can, however, help voters navigate the situations they face.

Our goal is to give voters the tools to understand what they need to bring to vote, plan for it, and then follow through with their intentions. 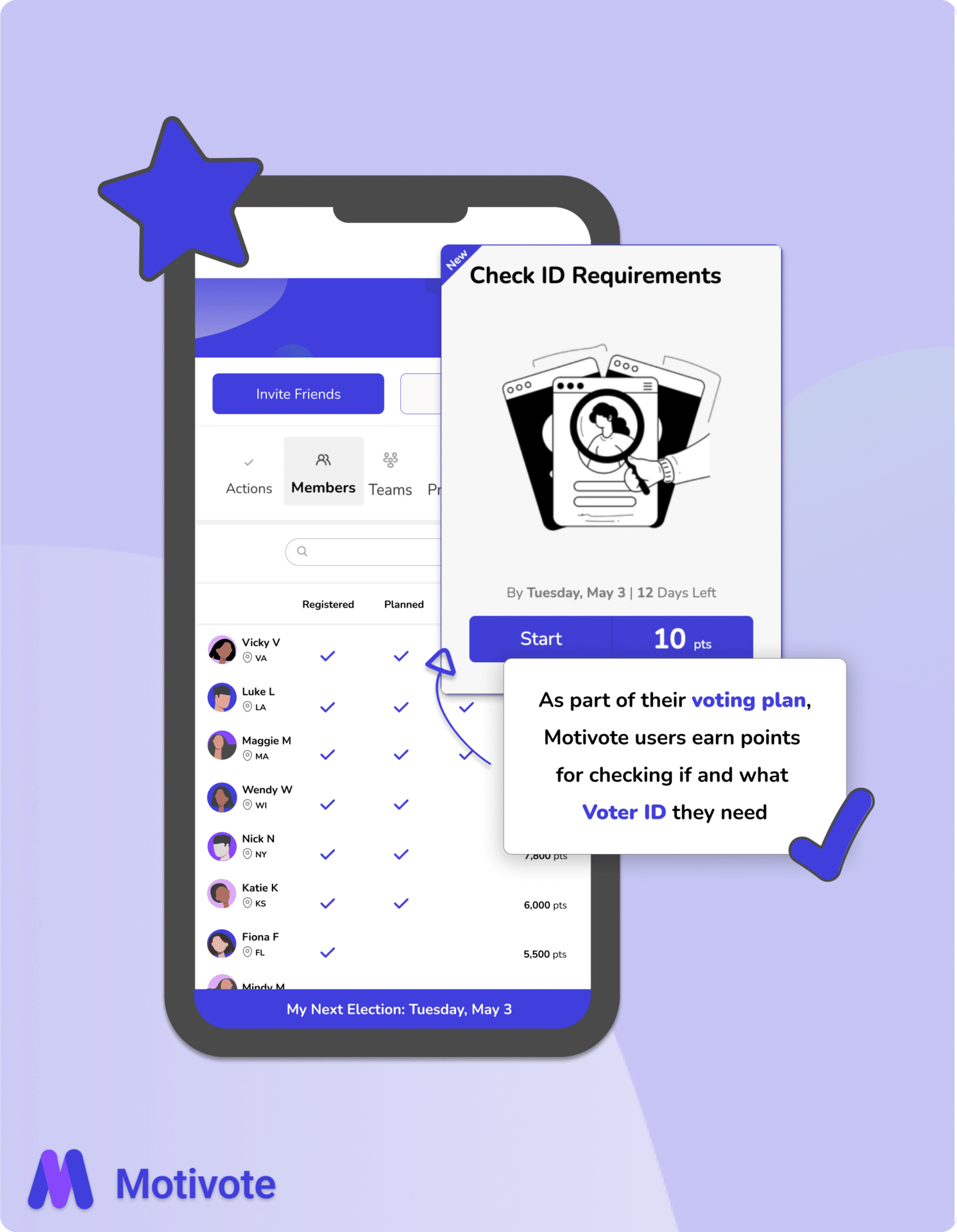 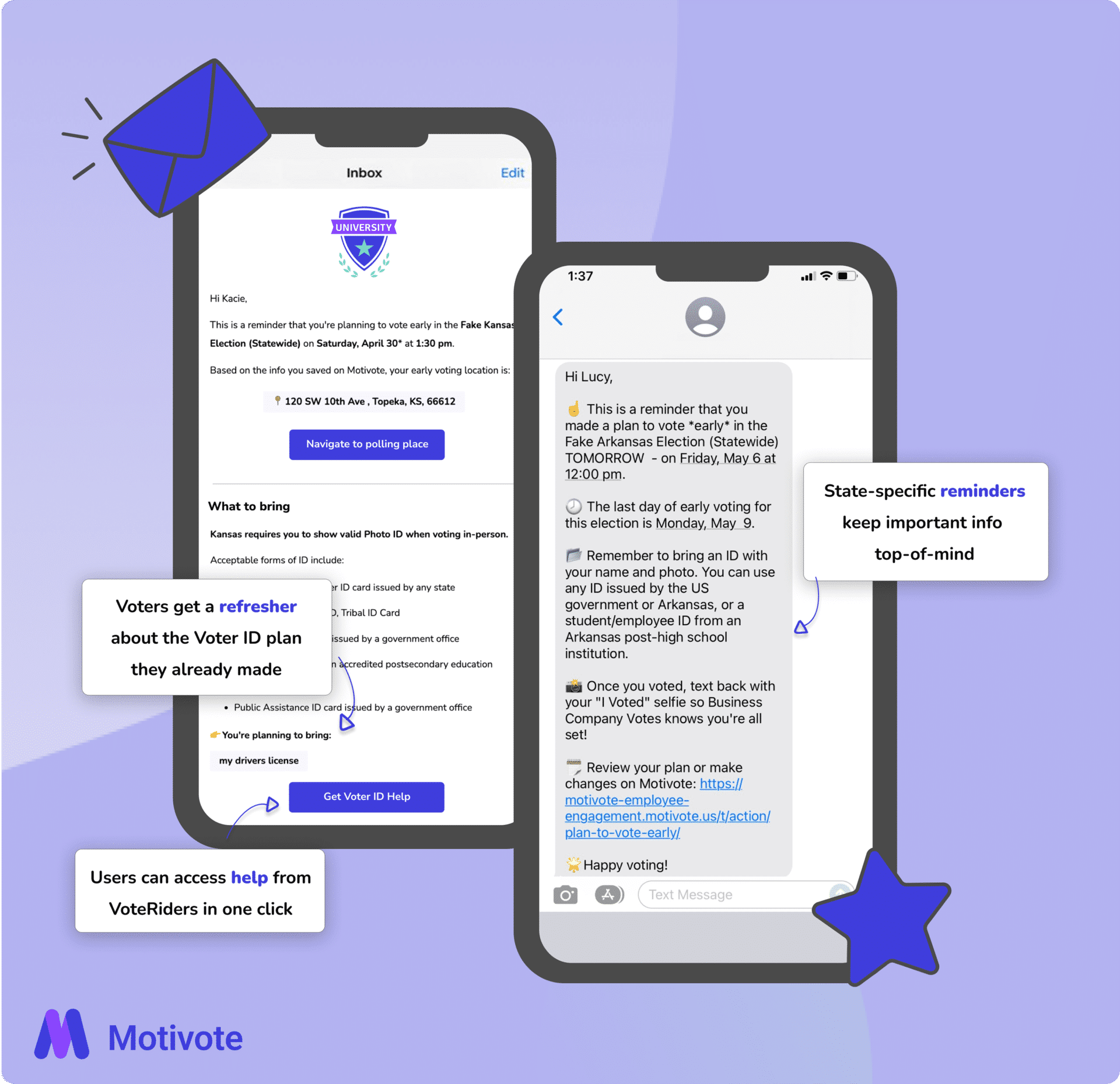 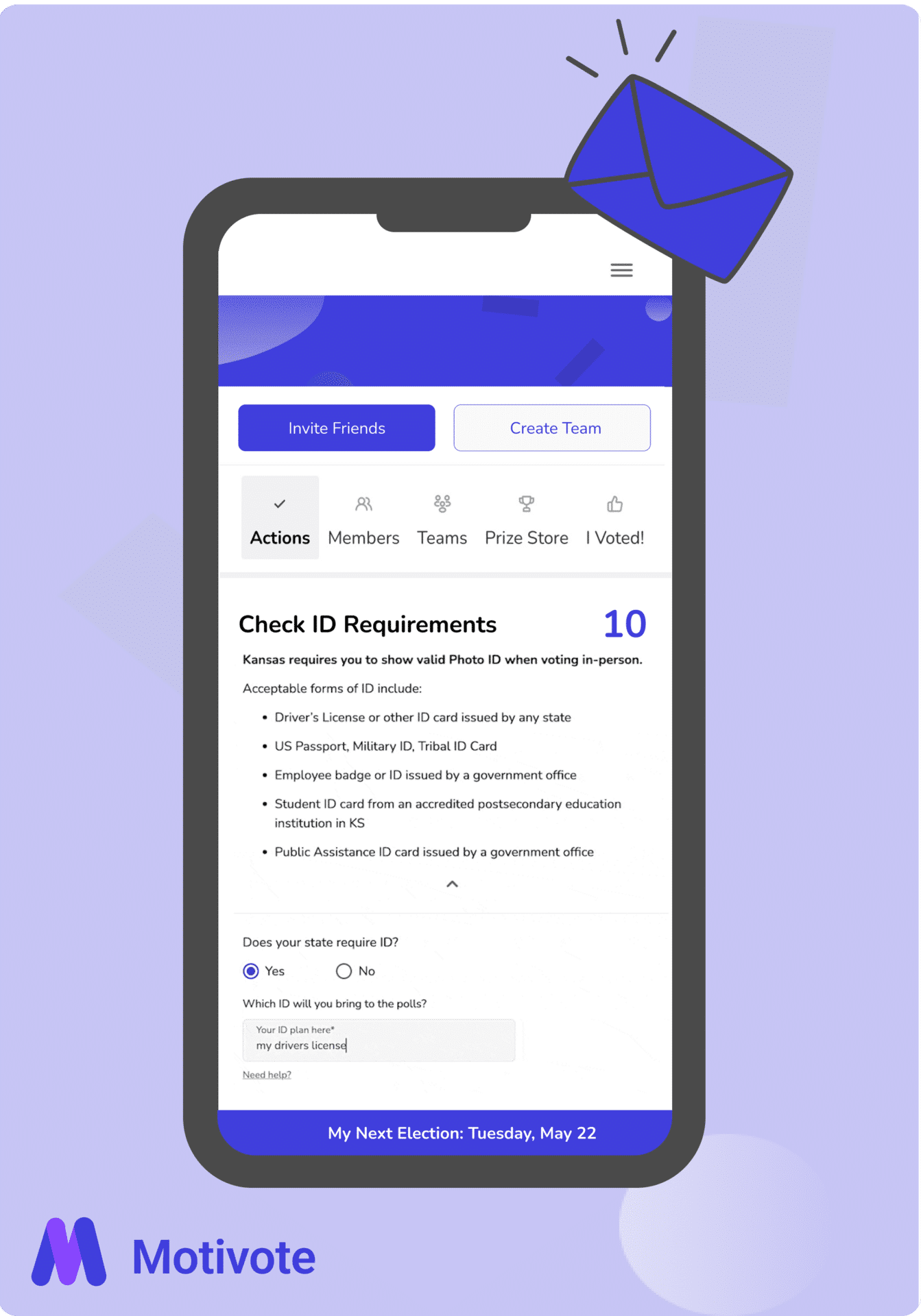 We’re excited to integrate VoteRiders resources within the Motivote platform to reduce friction around Voter ID. Here’s how we’re doing it:

Having spent way too much time on Secretary of State websites, we know how dense and poorly designed some of them can be.

Rather than sending our users to different corners of the internet, we feature VoteRiders’ state-specific instructions within Motivote. With everything in one place, there’s less drop-off.

This is especially important for states where you need ID to request an absentee ballot. We want voters to know what they need before they start filling out a form, rather than pause halfway through to find the documents they need and then get distracted.

We’re more likely to retain info if we engage with it than if we passively read it.

One of the ways Motivote users can earn team and individual points is by reviewing their state-specific Voter ID requirements and answering a follow-up question.

To answer the question, “Does your state require you to bring ID to vote?” they need to read and absorb the content.

At Motivote, we’re obsessed with plan-making — because it works. People who make a plan are 2X as likely to follow through with their goal.

As part of prompting our users to make a voting plan, we invite them to earn more points by sharing which ID they will bring (if required).

This ensures voters are thinking ahead about what they need — rather than it first crossing their mind while rushing over to the polling place. By walking voters through this step ahead of time, it allows space to track down or procure the ID they need.

While making a plan is great, it’s only the first step.

You also need to remember that you made it and then act on it.

So, in the email and SMS reminders that we send voters the day ahead of their planned voting time, we include the ID plan they made. This bumps their personal plan to the front of their mind, making it even more likely they’ll follow through.

The last piece of our partnership is making it easy to get unstuck. As soon as someone gets confused or frustrated, they could drop off — and might not come back.

We feature links to VoteRiders’ Helpline and Chatbot on every single part of our platform that has to do with ID, including within the email reminder users get the day before they vote.

And when users message Motivote’s “voting concierge” service, we’ll connect them to VoteRiders if we can’t answer a question ourselves.

Depending on the state you’re in and your level of experience with the voting process, casting a ballot may be a process that is full of friction and opportunities for drop-off.

Our mission is to help more people vote, more often. Partnering with VoteRiders is a powerful way to reduce the friction our users may face around Voter ID rules and equip everyone with the info they need to follow through!

Want to learn more about how you can use behavioral science to help voters decrease friction and increase follow-through? We’d love to chat! Learn more about Motivote or say hi at [email protected]